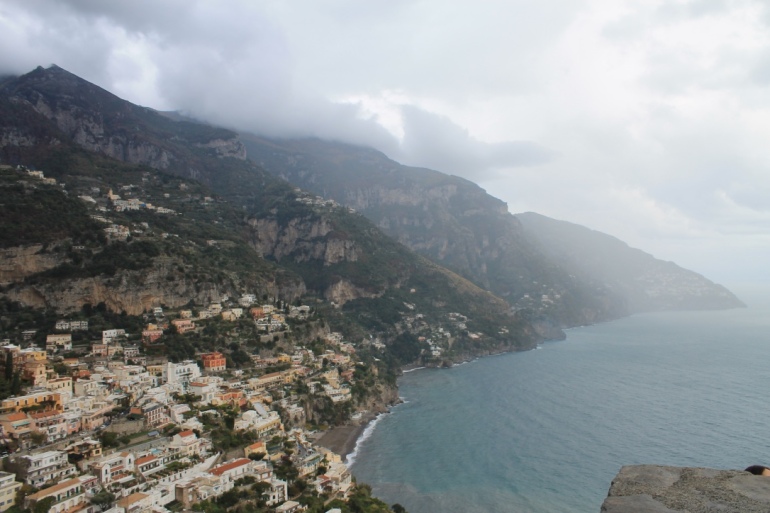 Before I actually traveled to Italy, only a few images of the country would come to mind: mostly just scenes of ancient ruins and colossal structures in Rome and gondolas navigating along the narrow canals of Venice. Both were beautiful images in my mind, but little did I know that another gorgeous view would soon be etched in my mind: The Amalfi Coast.

One of the unique features of Trafalgar, the tour company my mom and I went with for our Italy trip, is that it provides optional tours at an additional cost. Sometimes these optional tours are hits or misses with some you could live without it (hence the “optional”), and others that leave you feeling extremely gratified. I felt the latter with the Amalfi Coast experience, which was presented as an optional tour.

After taking a quick break at our hotel room after a hectic trip to Capri, we boarded our tour bus and departed for the Amalfi Coast, a roughly 30-minute trip from Sorrento.

Driving down winding roads along the coast, dark gray clouds began to roll in, followed by light rain.

About 20 minutes into the trip, our tour guide, Giuseppe, announced that we’d be getting off the bus at a lookout point for a photo op of Positano, a popular tourist town on the Amalfi Coast.

Once we got off the bus, I was awestruck with what was quite possibly the most breathtaking view I’d ever seen: rows of sun-bleached pink, peach and teracotta buildings all consistently Mediterranean-style lining a steep cliff leading to the ocean. And the dark clouds rolling over the town offered a dramatic perspective that was like something right out of a movie. 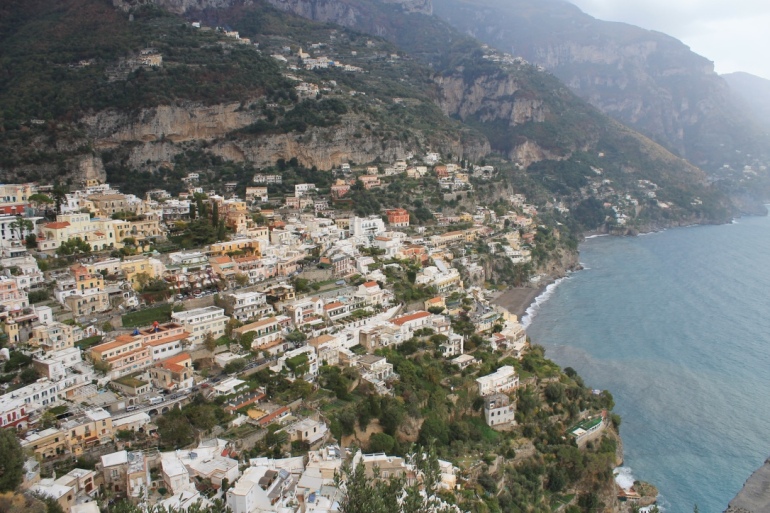 I snapped a few photos on my Canon EOS Rebel DSLR camera before the rain dumped on us and we all herded like sheep to the bus.

About 10 minutes later, the rain began to let up as we approached Positano, a cute and charming town characterized by narrow roads — with sharp turns — flanked by homes, boutiques, restaurants and other small businesses.

We stopped at a gas station and all got off the bus so we could take some time to wander the town and peruse all the little businesses.

Sloshing through rain puddles along narrow passageways and down steep stairs with a light mist blanketing us set the tone for this cozy and quaint town. 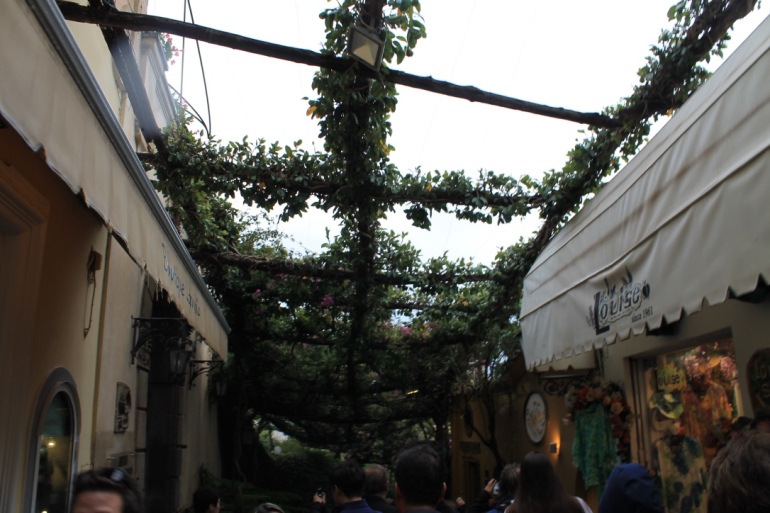 I realized I had actually seen Positano in photos before. From the bloggers I follow on Instagram to travel magazines and brochures, this distinct coastal town was practically everywhere! The only difference: Most of the photos showcased Positano in a different light. Literally. Most of the time, they usually captured this touristy beach town under a summer sun, with pops of bright colors from the buildings as well as rows of beach chairs, beds and umbrellas.

My view was completely different thanks to the rain. But I couldn’t have asked for a better one. 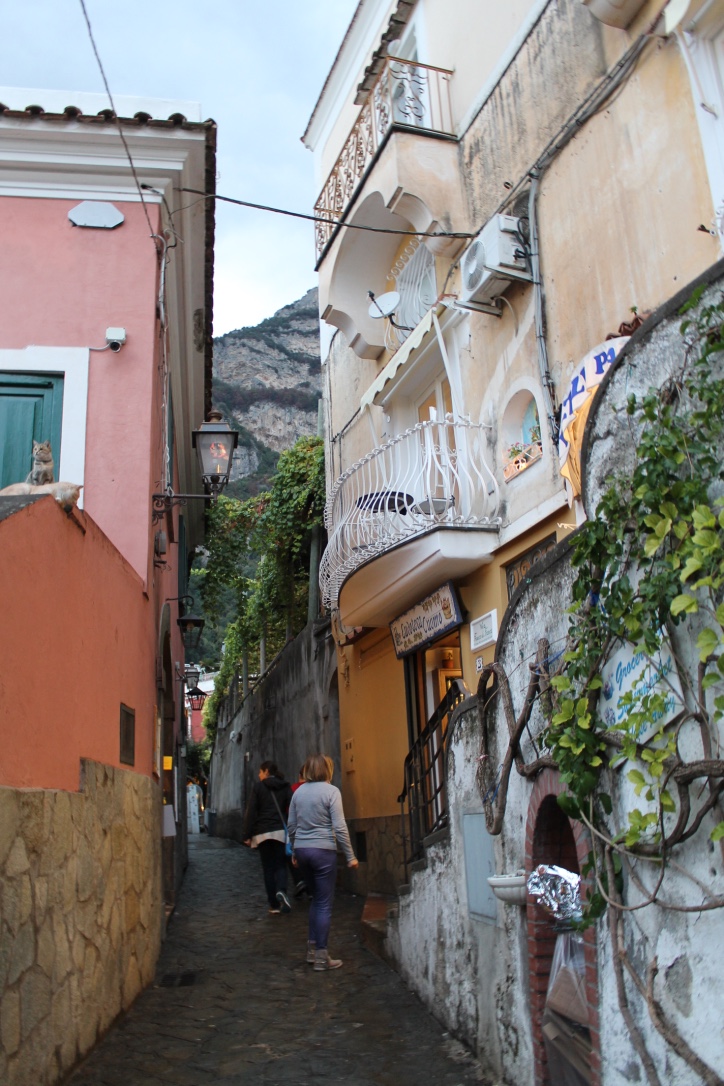 Finally, after walking downhill for 20 minutes or so, we reached the beach. Needless to say, I was a bit underwhelmed, with the dark sand resembling dirt, pieces of wood and debris lying around, and boats scattered in an unorderly fashion. But it led me to believe that the town probably takes better care of its beach in the summer months versus November. 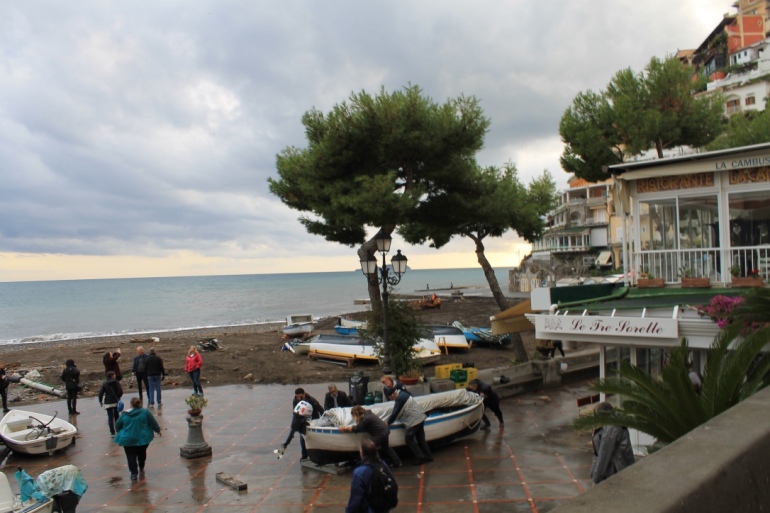 On the flip side, being at this beach was still beautiful in a strange way.

Earlier I saw all the buildings from above, but as I looked up at them from below, it was a completely different experience. With the contrast of the dark clouds hanging over the pastel-colored buildings, it was an oddly mesmerizing picture. It made me slightly nervous that the dozens of buildings, which looked like they were stacked on each other, would topple over at any given moment. 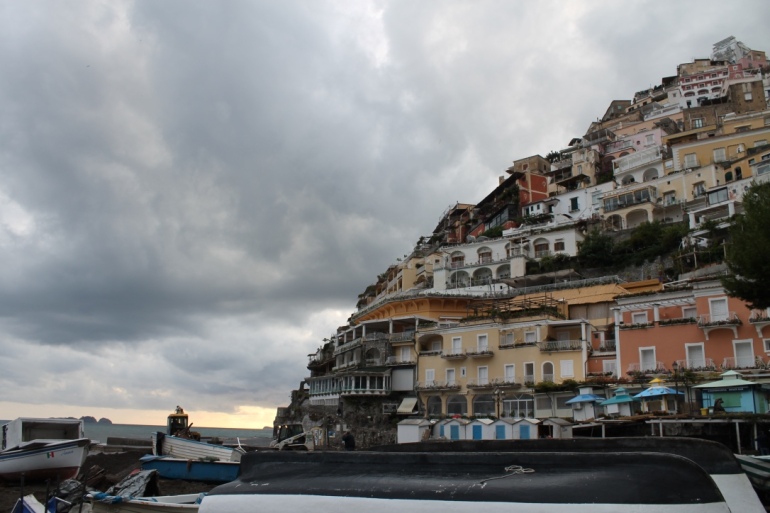 I snapped more photos, then it was time to head back to our original gas station meeting spot.

But first, the visit wouldn’t be complete without a few scoops of gelato! So we stopped off at a hole-in-the-wall gelato shop for a sweet treat before making our ascent back to the gas station. 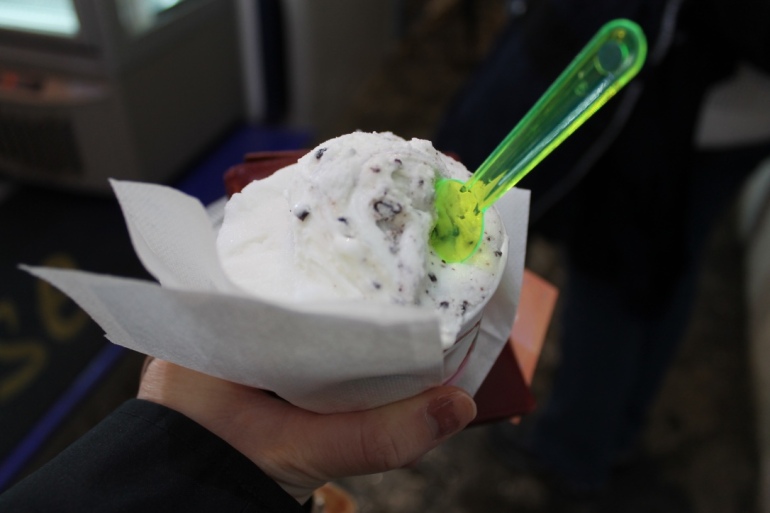 Darkness fell while the bus weaved its way out of Positano. I looked out the window at the lights sparkling from windows and car headlights. 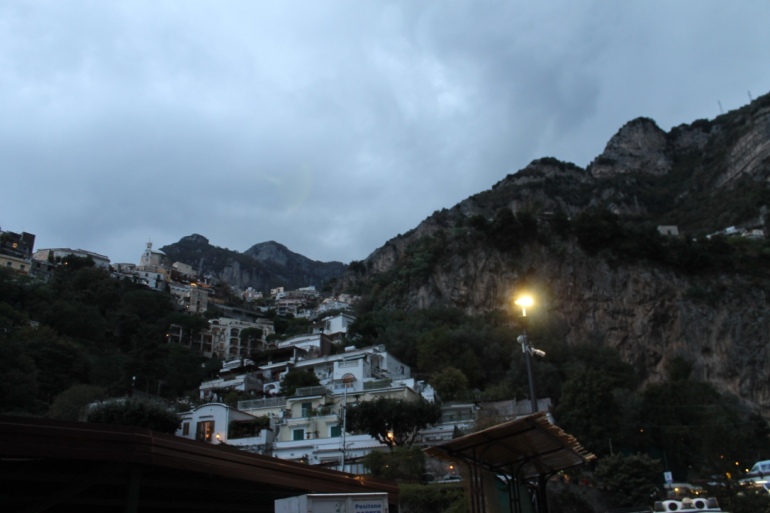 You know that song, “I left my heart in San Francisco?” Well, I think there should be a song like that for Positano. I was completely whisked away by this magical place. If I ever return to Italy, I think I want to spend more time here.