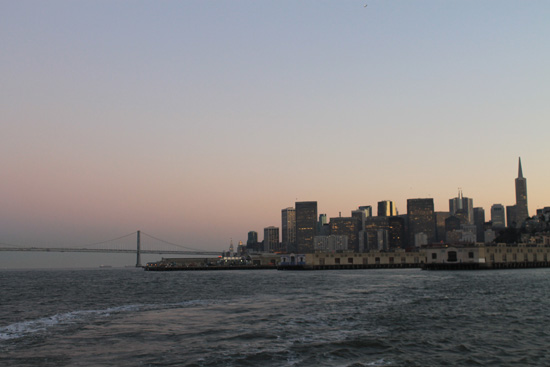 I’ll never forget when my college friend Nate announced that his roommate let him borrow his car for a weekend and could take it wherever he pleased, so he asked me if I was interested in tagging along for a road trip down to San Francisco from Seattle. I couldn’t pass this up since I had lifelong dreams of seeing the Golden Gate Bridge in person and indulging in clam chowder in a bread bowl. Unfortunately, plans fell through and we ended up staying back.

That was in 2008 and five years later, San Francisco was still on my bucket list. In June, my childhood friend Lauren casually mentioned marathons and her desire to run a half marathon in San Francisco in October. I was ecstatic when she asked if I’d like to accompany her and her friend Tannia — not for the running part of it, but the sightseeing part — provided she would be selected to run. Of course, I said yes, and fortunately, both Lauren and Tannia were selected.

I never imagined how quickly four months would pass by when October came around and it was time for our Bay Area adventure!

Cafe Mason
Tannia wanted to work an extra day, so Lauren and I departed the night before her. It was nearly midnight Thursday and after checking into our hotel in Union Square (the downtown area), we were craving a midnight snack, so the concierge pointed us to Cafe Mason down the street — an American and Mexican diner.

Yelp gave this place three stars, so I’m not entirely sure if it was because I was really hungry, but the vegetarian quesadilla I ordered was actually very good! Lauren was pleased with her chicken quesadilla as well.

If I thought the 24-hour diner down the street was good, I was really looking forward to other culinary treats that San Francisco had to offer.

Lombard Street
One of the must-see destinations on our itinerary was Lombard Street, the crookedest street in the world. We didn’t mean for this to be our very first stop on our first day in the city, but after spontaneously catching the cable car up the street we were already on and hearing the conductor yell out “Lombard Street,” the rest was history.

The view from the top of the crooked road was so refreshing. There was just something neat about looking out at the soft morning glow over steep roads that stretched out to the fog hanging over the bay.

Thinking we were pressed for time since Tannia would come at any minute, we caught the cable car back to where we first boarded and ran over to the cafe.

Studying the menu, I was about to order something light like oatmeal, but decided to get their special of the day: a peanut butter crepe drizzled with chocolate syrup and sprinkled with rice krispies cereal. I mean, I couldn’t justify not ordering a crepe at a place called Honey Honey Cafe & Crepery.

I try to avoid eating really sweet food for breakfast, but this was definitely an exception. A peanut butter-filled crepe may seem like a simple concoction, yet the melted filling stuffed in the crispy crepe batter was heavenly with each bite. If I go back here, I don’t know if I could order anything else.

Nick’s Crispy Tacos
Before leaving for San Francisco, my aunt put me in touch with my cousin’s friend John, since he lives in the city. He emailed me a list of restaurant recommendations including Nick’s Crispy Tacos in the Russian Hill district.

This was our first food stop after Tannia arrived in the city — an easy 15-minute bus ride away.

For some reason, I pictured a small hole-in-the-wall type of joint, but as we got off the bus and started walking down the street that Google Maps pointed us to, we reached a restaurant that looked more like the outside of a nightclub — I had to do a double take to make sure this was the right place. It was.

Since we were planning to have an earlier dinner, I ordered one grilled fish taco — Nick’s style, of course — which turned out to be just enough for me. It included a soft corn tortilla on the outside, a hard shell under that, fish, salsa, cilantro, cabbage and onions.

I don’t get to eat a lot of Mexican food where I’m from, so this was quite a treat for me!

Ghiradelli Square
Whenever I talk to people about their visits to San Francisco, Ghiradelli Square almost always comes up at least once. I guess it’s just one of those things that makes San Francisco stand out in a way. And I don’t know many people who don’t like chocolate.

Ghiradelli Square — located in the Fisherman’s Wharf area — is actually comprised of a whole slew of restaurants and shops — not just chocolate stores. I was surprised to see lots of trendy boutiques, diners and even a cupcake store! But of course, there was a main Ghiradelli chocolate store which we were sucked into by default.

I never thought I’d ever spend more than $50 on chocolates, but sure enough, it happened. I tried to find different flavored bars either unique to San Francisco or at least had wrappings that said “San Francisco” on them.

Alcatraz
Months before we left for California, we had booked a night tour of Alcatraz which we were probably looking forward to doing the most. But with news of the federal government shutdown resulting in the closures of national parks including Alcatraz, we worried that it would be closed the night we were supposed to go.

But luck was on our side when just three days before our trip, the government shutdown ended and national parks would open their doors to the public once again. This included Alcatraz which opened just a day before our booked date. I guess it was meant to be.

On Friday evening, we boarded a ferry near Fisherman’s Wharf that would take us about 1.5 miles offshore to Alcatraz Island, best known for holding some of America’s most notorious criminals — such as Al Capone and James “Whitey” Bulger — in its prison during the federal penitentiary era of 1934 to 1963.

As we left San Francisco, the view from the ferry was a rare and breathtaking sight: A giant and golden full moon hovered over the Oakland Bay Bridge all amidst an elegant lilac colored sky.

When I walked over to the other side of the ferry, a heavenly picture of thick fog rolling over the Golden Gate Bridge against the sunset grabbed my attention.

I think this was the turning point for my love affair with San Francisco.

Once we got to the island, the sun had already set, adding to the haunting nature of the prison.

We did the audio tour which enabled us to hear first-hand accounts of inmates’ and guards’ experiences. Walking through the dimly lit cell house — with deep and soft-spoken voices narrating over the realistic sounds of cell doors slamming, gun shots and the howling wind — I was taken back to a time and place that I would never want to personally experience.

If you were to stretch both your arms out as far as you could, that’s about how wide each of the cells were. Most included a small sleeping cot, toilet and sink. Those tight living conditions could make any normal person go insane. So I’m not surprised that many inmates attempted to escape; some were even successful. But with the frigid waters surrounding the island, I’m not sure how far they could’ve swam out before freezing to death.

Outside the prison, the ghastly image of the fog-shrouded moon that created an eerie glow above the waters off Alcatraz Island sent a chill down my spine.

My first two days spent in the Bay Area were already fulfilling so I was looking forward to what was next on the itinerary.