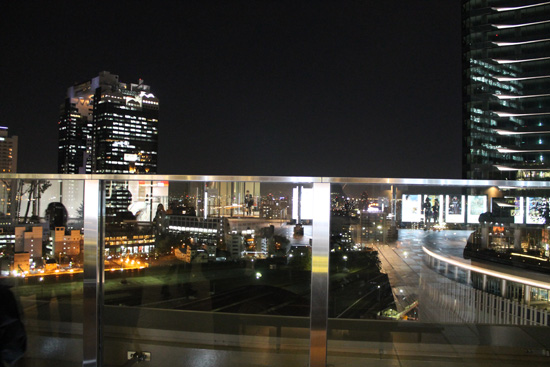 I had mixed feelings as we made our way to Osaka: part of me was ecstatic that I was about to visit one of the most populated cities in Japan, but the other part was sad knowing that this would be our final stop in Japan.

If I could go back to Japan again — and I will — one city I would love to explore further is Osaka. We only had about 20 hours here so I was hoping to get as much out of the city as I could.

According to Japan-guide.com, Osaka City — located in the Osaka Prefecture in the central part of Honshu Island (Japan’s main island) — has a population of about 2.5 million, making it the third most populous city after Tokyo and Yokohama. It also boasts one of the largest economies in the country and is considered a powerhouse in the Kansai region of Japan. Interesting since, according to our tour guide Hiro — an Osaka native — the people of Osaka tend to be on the frugal side when it comes to finances.

He also explained that Osakans have a quirky and slapstick sense of humor — if you motion a shooting gesture to someone on the street, they would fall over and play dead. Well, this was according to Hiro. I wasn’t about to try this for myself.

We arrived at our hotel, the Ramada Osaka, at about 5 p.m. and bid adieu to our bus driver Mirubayashi-san and bus assistant Eri-chan who would drive back to Tokyo. It was a bit sad to see them go since we had spent nearly two consecutive weeks getting to know both of them. We also didn’t know when we would ever see them again. But thank goodness for technology — we exchanged email and Facebook addresses, so hopefully I will get to meet up with them if I ever go back to Japan!

After unpacking, we enjoyed our last buffet dinner at our hotel and said a special thank you to our tour escort Carol for everything she had done for us. Thanks to her, our entire Japan tour was well planned, well executed and an all-around fulfilling experience!

Now, it was time to see Osaka! Hiro was kind enough to lead whoever wanted to go with him for a walking tour around the city. What better way to spend the last couple hours of my last night in Japan wandering the streets of Osaka!

Hiro led us to the Osaka Station City, a massive and busy train station that has shops, restaurants and some of the steepest escalators I’d ever seen. This station exemplified what I’d always pictured as a typical busy train station in Japan — complete with pedestrians scurrying through a rush of people coming from all directions.

After taking us to the center of the station — which he called the “octopus eye” — and riding up an escalator that seemed to stretch for miles, Hiro brought us to the roof of the building.

Peering through the glass and taking in the view of the glittering city lights of Osaka, I was overcome with emotion. I took that moment to reflect on what an amazing time I had in Japan. I couldn’t believe it was almost over and I would have to head back to reality soon.

We weren’t done for the night yet. If we could face the challenge of hiking up a set of stairs (there were no escalators or elevators available), we would be able to see a sky farm with various vegetables and fruits. Why not? A few of us raced up the stairs to see the “Tenku no Noen.”

I was left winded and trying to catch my breath, but seeing the unique sky farm was worth the climb: it exhibited neatly organized patches of greenery and mounds of dirt overlooking the captivating city lights of Osaka.

The next day, we ate our breakfast at the same hotel restaurant and packed our suitcases. We had a few hours to spare before leaving for the airport, so a few of us decided to walk to a bookstore down the street and see if there were any last-minute souvenirs we could purchase.

We got to the bookstore as soon as it opened, right at 10 a.m. Normally when you enter a store in the states, employees will greet you with a smile and a “hello” — and that’s if you’re lucky. But here, we were greeted by nearly 10 workers behind their cash registers, bowing and repeatedly chanting “irasshaimase!” (welcome) for about 15 minutes.

I had never felt so much like royalty until this moment! This was just one example of hospitality in Japan. What I noticed throughout my two weeks here was that the Japanese seem to consider their customers as gems — they treat them with the utmost respect and are willing to go overboard with their services. I often find this as something that’s lacking when I think about customer service in the U.S.

We left our hotel at about noon and headed for the Itami Airport where we would catch a plane to the Narita International Airport. Both Hiro and Carol joined us on our flight to Narita before embarking on their separate engagements — Hiro went back home to Tokyo and Carol also stuck around the area for another Japan tour. Teary-eyed, I hugged both of them goodbye like it was the end of the world.

Until this day, I am forever grateful and indebted to the both of them for what was quite possibly the most exciting two weeks of my life! Not only did I get to experience food and sights from a different part of the world, but I also got to understand my own heritage and culture. I got the chance to learn more about who I am.