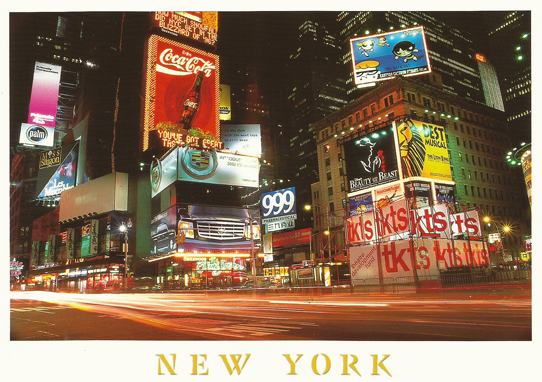 If there’s one city I must visit at least once before I die, it’s New York City. Sadly, I’ve never been there and it baffles me that I haven’t yet since I’ve always been an avid musical theater fanatic, I want to work in the journalism industry, and I love traveling. I guess I haven’t had the time or the money to go, but I know I’ll make it there someday.

The media has really been the force behind my desire to visit the Big Apple. As cheesy as it may sound, movies and television shows have given me a little window to a big city that I just want to jump through. It all started when I first watched “One Fine Day,” the 1996 film set in New York City and stars Michelle Pfeiffer and George Clooney. I was utterly impressed with what I saw through my little black box: the massive high-rise buildings, sophisticated-looking business people walking the streets, and general feeling that I got just by seeing the scenery were truly captivating to me. And I’m still captivated…

I know that the list of places to see and things to do in NYC is infinite, but based on what I’ve seen in the media and heard from friends, if I were to compile my own itinerary, it would likely include the following:

Kristin Chenoweth (left) and Idina Menzel (right) as Glinda and the Wicked Witch of the West in Wicked on Broadway. Photo courtesy: Wicked Gallery.

I’m a musical theater junkie, but I’ve only seen live musical theater productions at local theaters in Hawaii and Seattle. Judging from some of the productions that are on Broadway right now (Billy Elliot, Chicago and the Lion King), I’d probably be happy seeing anything. But Wicked remains my top priority. I can probably sing you the entire soundtrack of musical, but if you were to ask me to explain the storyline, all I could really tell you is that it’s based on the stories of the Wicked Witch of the West and Glinda the Good Witch. This musical opened at the Gershwin Theater in 2004 and is still on Broadway seven years later so that must mean it’s got something if it’s still running. I came so close to seeing the touring production version of Wicked in Seattle. Twice, in fact. I failed the first time because I looked into it too late so the tickets were sold out. Missed my opportunity the second time because I moved to Hawaii days before the show opening. Maybe it’s fate. Maybe the theater gods are telling me to watch the actual live Broadway production in New York City instead.

Everyone tells me that Katz’s Delicatessen in Manhattan is a must-go when you’re in the city. Anthony Bourdain says that Katz’s makes a fine pastrami sandwich and I believe him, but the only way I’m going to know for sure is if I experience it myself. I want to know Katz’s for its food rather than what I remember of Meg Ryan in “When Harry Met Sally.”

I refuse to leave New York City without stopping off at these places. These are landmarks I envision whenever someone even mentions New York City. These are sights that define New York City’s history and culture so not going to those places would be like going to a steak house and not eating steak (I’ve done this before and completely regret it).

I was always jealous when my friends said they were off to New York City for a summer vacation. In fact, when my friend sent me this postcard, I admit, I was jealous. But I think I was more excited than jealous because I thoroughly enjoyed hearing all of her stories from her week there. She made me want to go there even more.

I know my itinerary seems a little sparse. After all, how can one possibly create a complete itinerary of things to do and places to see in a city as big as New York City? So I’m looking to all of you to fill me in on your experiences and recommendations!